Moontan and Crystal, two street clowns without a busking permit, have just been stopped by police. Moontan is sitting sketching at an outdoor café, as Crystal skates up and sits down. She has been trying 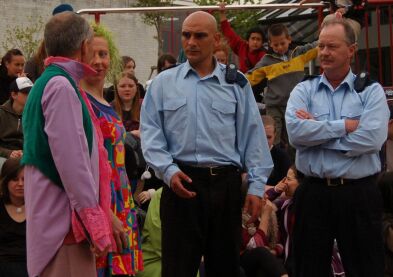 unsuccessfully to get a permit and they discuss what this means.

Moontan is of a mood to give up, but Crystal is not, and as their relationship is based in their performing work, it is not clear what Moontan’s lack of motivation could mean for their personal relationship.

A protest march sweeps down the street towards the Opera House and Moontan and Crystal become caught up in the action, as the site wall around the derelict theatre is dismantled and the protesters first occupy, and then barricade themselves inside the theatre, during which Moontan is almost arrested.

The arts community, united by the politically astute Aroha, are crowded into the theatre, debating how best to persuade the Council to turn it into an arts centre, while, more interested in the building, Moontan and Crystal spontaneously explore the stage. They begin to play and gradually gain the attention of the audience, turning the experience into a show, and bringing the theatre to life.

The occupants are given a reprieve by the police until the next day, and they decide to stay in the theatre overnight. There is an intimate moment, and a discussion of clown, as Moontan and Crystal settle down to sleep on the stage of the theatre, surrounded by bodies in sleeping bags.

The next day Moontan becomes the mascot of the action, as his picture is in the paper, taken when he was almost arrested the day before.

Moontan and Crystal attempt another street theatre show in the square. They watch for an opening in the crowd to mount their show. Success means enough money for coffee and a place to stay, but there's always the threat of arrest, and today they are again closed down by the police.

They return to the Opera House to face hostile gang members and the occupants are warned by the police that the council will close them down. One final show is scheduled, and more people arrive at the Opera House to support the action.

Moontan and Crystal open the show and are thrilling the audience, as the police attempt to close it down. They escape into the audience, and the pressure from the crowd forces a rethink from the police, who let the show go ahead.

Moontan and Crystal walk away from the Opera House in the final scene, as everyone streams out of the building behind them. They discuss the next step, their money situation, and the state of the world, developing the themes from the opening scene.

On this site you can check out the audition and crew call opportunities, recent media coverage, or take a look at our new feature film project based on Dance Sisters, where you can read an outline of the film, or reviews of the novel on which the film is based. You can also check out Artmedia's digital short film, Moontan (pictured) which was released in 2007 - read reviews of the book on which the film is based, or scene one of the script, or find information on the cast and production team.