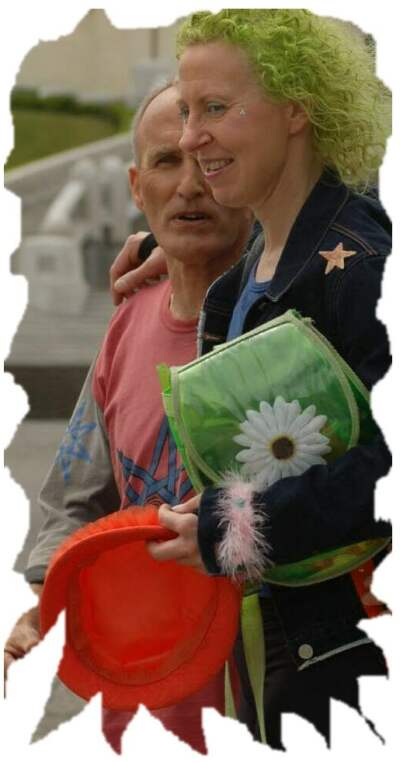 A LOVE of fun and the unexpected have brought clowns Annette Devick and Mark Hudson to Wanganui.


What else would attract two professional clowns, with no shortage of work, to fly from Canada and Australia respectively, to star in a low budget film in a provincial New Zealand town,

The two will star in fellow clown and Wanganui born author Alan Clay's movie Moontan. The script, which is based on on his 1994 published book of the same name, is about two clowns who accidentally get involved in an occupation of an unused council owned theatre which people want for an arts community.

Ms Devick, who will play the role of Crystal, said when she heard Mr Clay was looking for a Crystal it was something she had to say yes to.


"Crystal is a bit of a free spirit - very confident, fearless and with a real zest for life. She is someone with a gung ho - let's do it attitude, taking life head on."

For Australian Mark Hudson "the thrill of jumping into the unexpected" spurred him to reject work opportunities in Sydney for the Wanganui role. Coming to New Zealand for Moontan was an adventure and an experience, he said.


"Playing Moontan is a real joy, unlike Crystal he struggles with life, when not performing. He's a reflective character and the relationship he has with Crystal has some wonderful moments."

Mr Hudson also is delighted with the passion everyone involved has for the film. "It's a good script and everyone is very focused."

The film is being shot in the Royal Wanganui Opera House and several hundred people are being sought as extras on October 14 and 15. They will be part of the crowd who occupy the opera house.

On this site you can check out the audition and crew call opportunities, recent media coverage, or take a look at our new feature film project based on Dance Sisters, where you can read an outline of the film, or reviews of the novel on which the film is based.

You can also check out Artmedia's digital short film, Moontan (pictured) which was released in 2007 - read the synopsis, check out reviews of the book on which the film is based, read scene one of the script, and find information on the cast and production team.